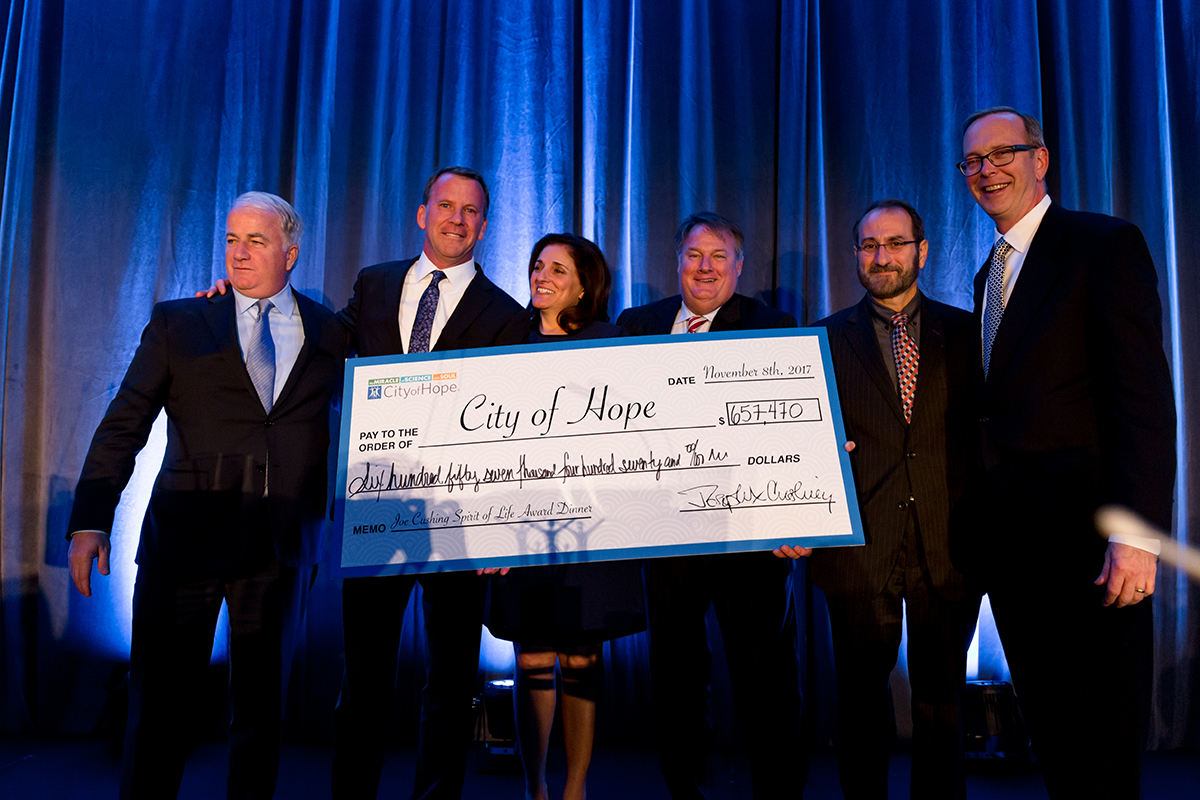 Last month, HSA PrimeCare EVP Timothy M. Stanton co-chaired The Real Estate and Construction Council of Chicago’s 25th Annual City of Hope Gala. The event gathered attendees from all sectors of the real estate industry to raise money for the City of Hope Hospital and Cancer Research Center and to present the City of Hope’s Spirit of Life award.

During the gala, Stanton presented the award to this year’s recipient, Joseph X. Cushing, Stanton’s cousin and EVP of Cushing and Company. In his speech, Tim focused on his highest values, which he believes Cushing also lives by: being good, being kind, being happy, and making a difference. Quoting Adrian Corday, Tim provided a recipe for happiness: “Live with enthusiasm, smile for no reason, love without conditions, act with purpose, and listen with your heart.”

Cushing was honored for his twenty-plus years of support for the organization. “It’s humbling to be recognized by an organization at the forefront of saving lives and volunteer work I am passionate about,” said Cushing. “We still have much work to do, and I’m excited to continue supporting this terrific organization.”

During his acceptance speech, he cited one of City of Hope’s early leaders, Samuel Golter, who centered his model on compassion, honor, and human dignity. He also spoke of friends and family members who have impacted him over the years. Of Stanton, Cushing said, “Anyone who is fortunate enough to have [Tim] as a friend, knows we have one of the best friends anyone could have. Tim is patient and funny, and breaking the mold of a broker, he’s smart and he’s thoughtful.”

With over 600 attendees, the gala raised over $657,000 for cancer, diabetes and other life-threatening disease research.

About City of Hope

City of Hope is an independent research and treatment center for cancer, diabetes and other life-threatening diseases. Designated as one of only 49 comprehensive cancer centers, the highest recognition bestowed by the National Cancer Institute, City of Hope is also a founding member of the National Comprehensive Cancer Network, with research and treatment protocols that advance care throughout the world. City of Hope is located in Duarte, California, just northeast of Los Angeles, with community clinics throughout Southern California. It is ranked as one of “America’s Best Hospitals” in cancer by U.S. News & World Report. Founded in 1913, City of Hope is a pioneer in the fields of bone marrow transplantation, diabetes and numerous breakthrough cancer drugs based on technology developed at the institution. For more information about City of Hope, follow them on Facebook, Twitter, YouTube or Instagram.

Join the email list for updates and new listings.